FACTS and FAQ on the US Elections

FACTS and FAQ: US Elections

Thank you for choosing our US elections widgets. Below, we have compiled information about their use, which we will update over the course of the election year.

Editorial pointers for the election night – and afterwards

In 2020 it cannot be accurately predicted when exactly which forecasts and actual results can be expected. Due to coronavirus pandemic the proportion of postal vote will be significantly increased. In some states it is sufficient if the ballot paper was sent on November 3rd. Therefore, it is to be expected that there will be some delay in the vote count and the final result.

When do widgets switch from polls to LIVE results/trends?
::: Update 16/10/2020 :::
On 3/11/2020 at 11.30 pm CET  The first results/forecasts are expected at ca. 1.00 am CET from Vermont (3 electors, probably to Biden) as well as from Kentucky (8 electors, probably to Trump).
The widgets are automatically switched from polls to LIVE at 23.30 pm CET. You can bring this time forward individually using the AutoResetTime on the setup page, or set it on "0".  On "0" the widgets switch from polls to LIVE automatically when the first result/trend is sent.

When the first exit polls and results can be expected?
Polling stations in the first few states (Georgia, South Carolina, Vermont, Indiana, Kentucky, Virginia, Florida) will close at 1.00 a.m. CET.
In 2016 at 1.05 a.m. after the first counts and forecasts the first states (Kentucky, Indiana, Vermont) were “called” (classified as won).

What sources will be used in the election night?
::: Update 16/10/2020 :::
US television channel CNN
[For the surveys we use 270toWin https://www.270towin.com/2020-polls-biden-trump/ as source. It aggregates various surveys to calculate their own numbers. This tends to be more accurate than the numbers of individual institutes. The data from 270toWin we use is based on polls like it's common for European users  (not on US models or ratings). The widgtes are updated on daily basis.]

How do the widgets behave themselves during the election night?

Example 1: The start of the election night 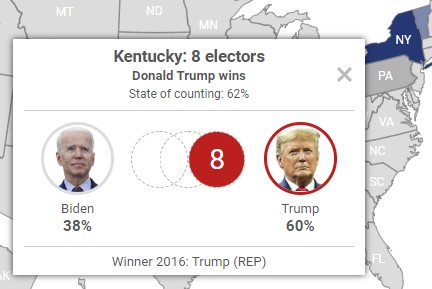 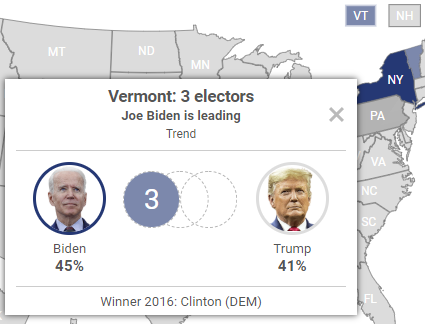 Example 2: The course of the election night

We will also update every new intermediate result in the days after November 3rd until the final result has been determined!

Since May 4th it is possible for you to generate your embed codes for further widgets on your setup page. This new package includes widgets with the following content on the presidential and congressional election:

On your setup page you can generate your embed codes.
If you are supplied via FTP, your customisation directory my_pw_us.zip was updated as well as the ReadMe file. 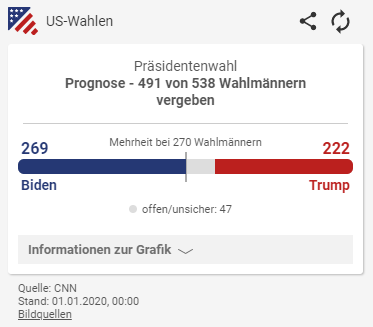 Presidential election – Combination electors in total+state map+list
Content
- Distribution of electoral votes in total (surveys and results)
- Distribution of electoral votes by state (surveys and results), visualised in US map and state list, further details can be viewed by clicking on map/list
- Approval rate by state (percentage)
- Latest poll update by state
- 2016 winner by state
- Information on electors and the electoral system
Other
- Survey results summarize the state trends - automatically changes from surveys to results on election day (configurable) 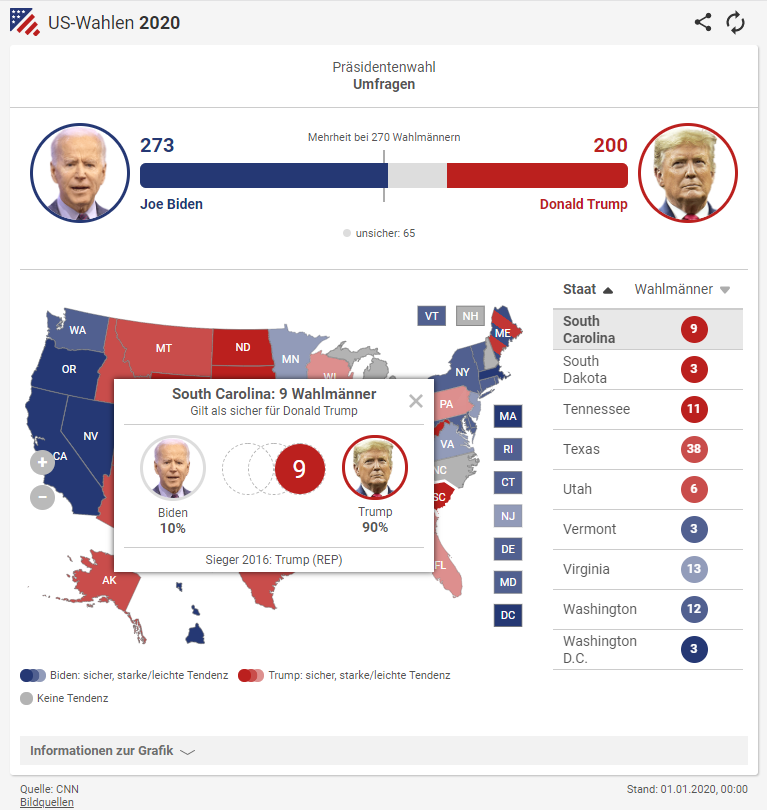 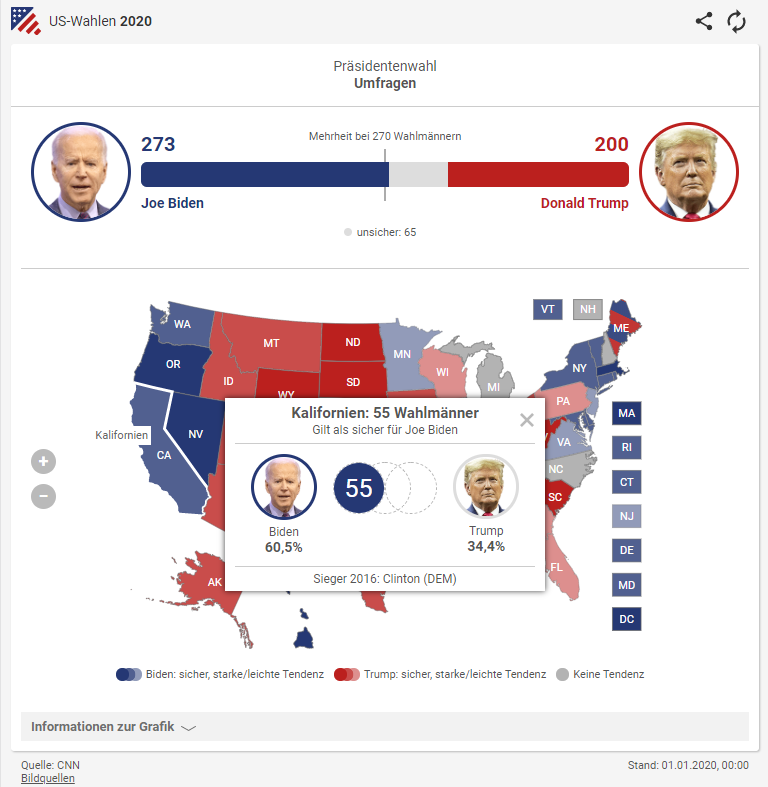 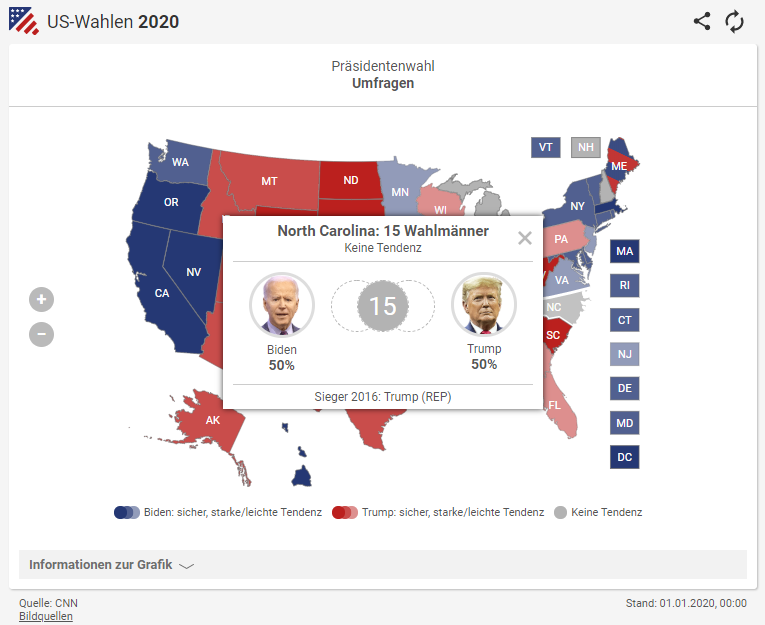 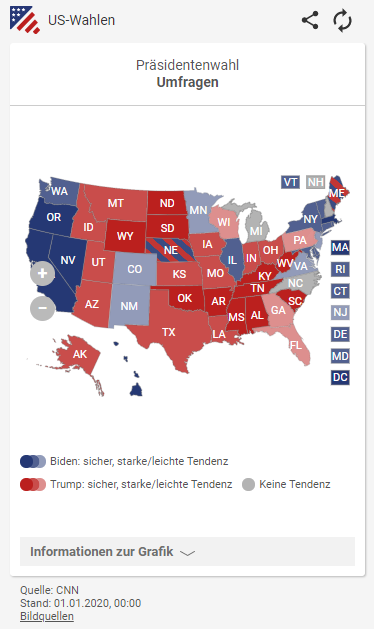 Presidential election – total vote percentage
[Polls = “If the election were held today, who would you vote for?”]

Other
- mobile version without portraits
- Due to the nature of the electoral system, the vote percentages can contradict the overall outcome of the election 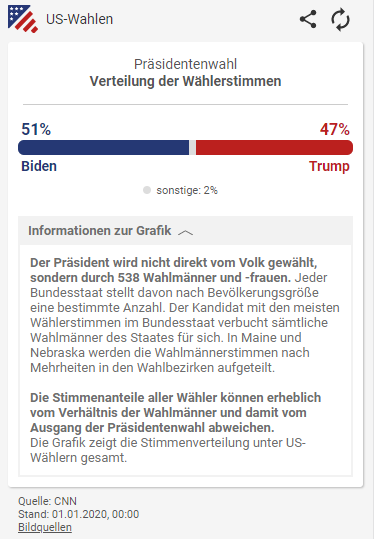 Content
- Allocation of seats according to surveys and election result; no percentages
- Starting point/update distribution of seats prior to election
- Information on the composition of the chambers and the electoral system

Other
- Limited to a current representation of the seat distribution due to the majority voting system, percentages of votes are not reflective of the balance of power within the chambers. 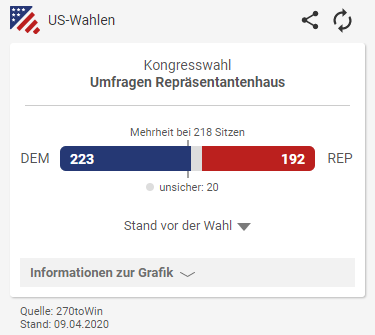 Our offer covers the elections in the US and is divided into three phases:

I. Primaries: February 3 to June 7

Content until February 3: Primary dates and number of delegate votes to be allocated per state and party.
Sortable by date and party: When are particularly important primary dates? Brief explanation of the primary system
From February 3: Expanded results

Content before and after February 3: “Sunday poll” of electable top Democrats against the incumbent; information about graphics and data
Updates: weekly (Source: RealClearPolitics)

II. After the primaries, before the election: Election campaign - polls

Should you have any further questions about the election, you can contact us from Monday to Friday from 9 am to 5 pm via our service desk.

J
Johanna is the author of this solution article.

Did you find it helpful? Yes No

Send feedback
Sorry we couldn't be helpful. Help us improve this article with your feedback.